In some scenarios, we need to periodally run a task, or some tasks need to be long running in background threads. To decouple it from main business, we could isolate it as a servie, and then communication with it through some protocols, e.g. named pipe, net.tcp, TCP/IP, HTTP and so on. The service can be hosted in Windows Service, but if we deal with clients with lots of security restrictions on their servers which makes running a Windows Service difficalt or impossible.

Where to Host service will be better

As all you know, Web hosted environment had better security restrictions and authorization, on the other hand, the deployment very easy. So, I like to run background threads/services on the IIS ASP.NET worker process instead of using Windows Services, but the story not the all, some problems must to be solved.

What problems host services in IIS

If you inspect the Application Pool advanced settings, you will see the Idle Time-out (minutes) 20, and Idle Time-out Action terminate. That’s to say, if haven’t any request in 20 minutes, the worker process will be terminated so that your backgroud threads/services will be stopped. And in the host services in IIS case, will haven’t any request from outsides, so, the services will be stopped after 20 minutes. 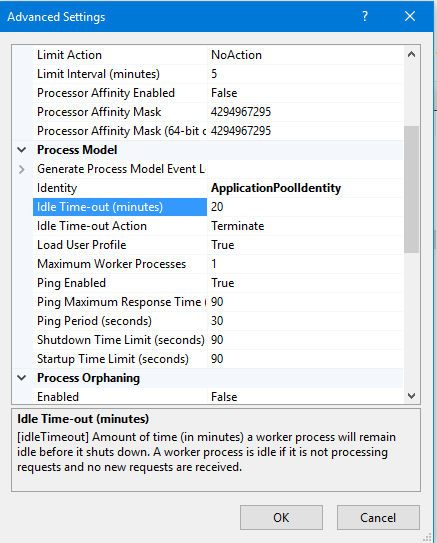 IIS team provides a Application Warm-Up module, was available as an add-on for IIS 7.5. There are two basic functions to this module, providing for a quicker startup of applications that rquire time to initialize connection, query database, and compile the APS.NET page code; and to provide an alternate user experience rather than just a spinning hourglass while waiting for the page to load.

In previous version of IIS 8, the first request for an application would result in the worker process spinning up, caching static files, compiling the application, and loading the page.

I'm working at Tencent. My family live in Hangzhou, Zhejiang, China. Maybe the difference with other programmers is I already married, and have a lovely daughter. (^<>^)

A man like me, is unique in the world of existence, no matter where you go, there belonging to my stage. Like desert gold, light can not hide forever! Especially my messy hair, melancholy eyes, sigh of stubble, handsome face, are deeply addicted whom even I.